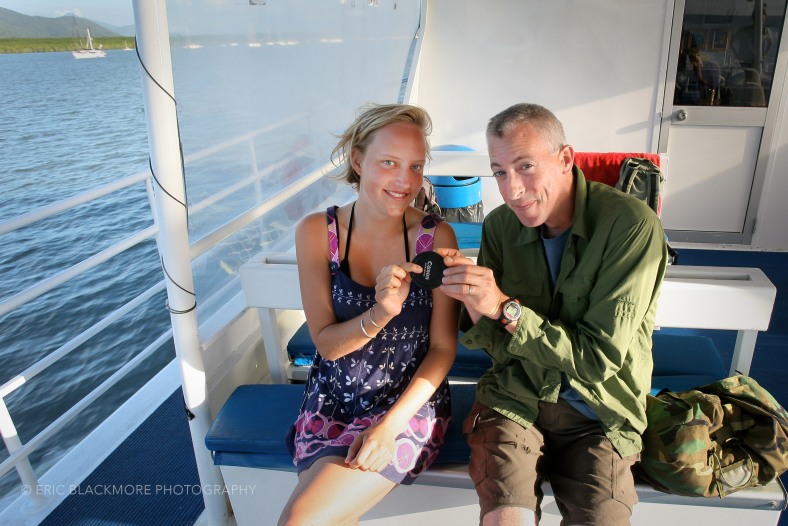 A Brief Journey of My F@%king Lens Cap, how it fell out of a helicpter into the Great Barrier Reef.

This is the story, of a brief journey of my lens cap. The fellow on the right is Gregg, a rather genial fellow, as his rather impish grin would suggest. The lady on the left, no clue, but she is vital to the travels of my lens cap. The setting Australia, on the Great Barrier Reef near Cairns. Gregg was leading a travel abroad group from Florida Southern College, there were 54 of us, four faculty, one spouse and the rest were students, eager to explore the world. We had taken a boat out to the reef for a day of scuba diving, snorkeling and one helicopter ride. Gregg took the helicopter ride, the rest of us went into the pool.

We had made it out to the reef on a beautiful day. The current was minimal, the waves were about one to two feet and the water was clear! A bunch of us, including myself, had our hearts set on scuba diving. We were newly certified and ready to go. Gregg on the other hand, preferred to see the reef from above. He at that point asked if he could use my camera, as I would not be shooting underwater. No worries Mate! I trusted Gregg as the responsible professor he was, my camera is your camera. So off we went on our separate adventures, exploring the sky above and the reef below.

After a few hours of diving we made it back on board, tired and exhilarated by the sights we had seen. Gregg was already on board and not looking too happy. He slowly came up to me, and told me he had lost my lens cap. He was of course very apologetic and immediately offered to buy me a new one, once we returned to civilization. I on the other hand, would not let an opportunity like this pass. He was after all a good friend and colleague, and there are rules about these kind of things between friends.

What do you mean you lost my lens cap!!! You mean to tell me that you dropped my lens cap into the Great Barrier Reef from a helicopter??? How in the hell am I ever going to get that back??? This went on for a while as is customary between friends. Then Gregg became, lets say, a bit perturbed. You know what I am going to do if I ever find that F@%king lens cap, he said. I am going to throw that F@&king lens cap right back into the water! And it was not too long after that, that the last divers came onto the boat. The young lass to the left of Gregg in the photo, came on board and was carrying a Canon 55mm lens cap, my lens cap. Gregg was so happy and relieved, that he I believe, gave her a finders fee.

So my now F@%king lens cap had traveled to Australia, jumped out of a helicopter and went swimming in the Great Barrier Reef. It didn’t seem right to hold onto such an adventurous lens cap. So for Christmas that year, I framed a sunset picture, taken from the boat on the reef. In the frame of that picture was my F@%king lens cap. To make it more personal, I wrote My F@&king Lens Cap on duct tape and put it on the lens cap. And to this day it rests somewhere in Gregg’s house, at peace.