The crosses at Normandy American Cemetery and Memorial.

The crosses at Normandy American Cemetery and Memorial.

A view from inside of the German bunker looking out over barbed wire to the sea.

The cratered fields of Normandy, left as they were from June 6, 1944.

The cliffs of Normandy with barbed wire still in place. 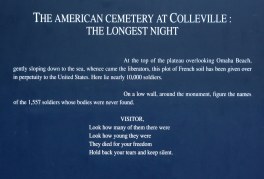 The longest day and night.

This is a fitting post for today, as it is Veterans Day. Here are some panoramic images from Normandy, France. We were in France in 2012, teaching photography with my group of students from Florida Southern College. We were coming from Mont Saint-Michel on our way to Paris and took a day to visit Normandy. The memorials there were beautiful and sobering for many of my students. Many had never been in such a large cemetery before and the field of crosses was a bit overwhelming for some. We also visited Pointe du Hoc and were able to go into the German fortified bunkers and see the cratered bomb fields as they are still unfilled. This day was a sober reminder of the horrors of war and a fitting memorial to our brave veterans that gave their lives on the longest day and night.

For myself I had a personal tie to this place. My grandfather was here in Normandy on June 6, 1944. He did not storm the beaches or climb the cliffs. His job was to ferry the dead from the battle field. This task he had was something he preferred not to talk about, but he did say it was the saddest job he ever had to endure.